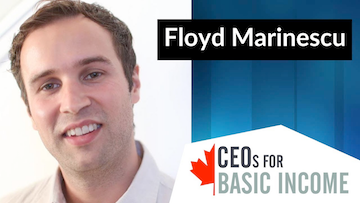 Floyd Marinescu is the Executive Director of UBI Works and the CEO and co-founder of C4Media which provides software development news and learning events serving 1.2M online on InfoQ.com, and 8000 attendees annually via QCon conferences in SF, NY, London, Beijing, Shanghai, and Sao Paulo.

One of the prevalent themes which has emerged during episodes of #forwhatitsworthpodcast has been the socioeconomic divide as a root cause of social unrest and economic uncertainty. Our guest for the next episode of #forwhatitsworth is @floydmarinescu, CEO of #C4media , a small multinational, high tech company. Floyd is also the founder of #ubiworks.

In late December 2020 , #ubiworks released a independent economic report commissioned by the #canadiancentreforeconomicanalysis which illustrates how Canada can address poverty and the socioeconomic divide, support increased #innovaton and kick start the economy post pandemic. Join us on Thursday, February 4th for #buildingbackbetter For What it’s Worth

To Listen to the Podcast Interview with Floyd, click HERE