I was introduced to Lee Jay and YOUTHeatre through Oliver Hamilton, a lawyer at Severide Law Firm on the lower mainland. Oliver helped me to form WINCan (Workplace Innovation Network for Canada) back in late 2019.

Oliver was also working with Lee Jay to create Youtheatre. Oliver saw the connection straight away. The connection between, innovation and knowledge management and Indigenous Ways of Knowing, and the shared passion for Praxis. He made the introduction  and the rest as they say, "is History"  through our commonality, Lee Jay and I began to explore options for a podcast episode as well as how we might work together through WINCan to bring the knowledge, wisdom and experience woven into the cultural traditions of First Nation's Communities, to light - to make this knowledge explicit and reference-able to both Indigenous communities as well as to all Canadians.

I have to admit my own knowledge of the customs and traditions of First Nation's Communities is limited. However my mother, a well known costume designer for the Canadian Broadcasting Corporation, designed costumes for many years for the Confederation Theatre in Charlottetown, Prince Edward Island and for Les Feux Folletts - a cultural dance show high-lighting the many cultures that exists within the nation of Canada including Native Canadian, Acadian, French Canadian, Scottish, Chinese, Dutch, Eastern European, and many others.

When I was a boy I accompanied her on her many research excursions to First Nation's communities as she learned about authentic regalia and Indigenous ceremonial traditions and I fell in love with the spirituality practiced by First Nation's peoples - the art forms, jewelry, dance, ceremony, clothing etc.

I also had the opportunity to work on a number of Knowledge Management projects with First Nations communities during my tenure with The Institute for Knowledge Innovation and Technology at the University of Toronto, where we worked with a number of communities across Canada in an attempt to capture and preserve indigenous knowledge. I have to be honest, very few of these initiatives proved successful. Reflecting back to those days, I think while we had the best of intentions, we were applying a process that sought to change how first nations shared knowledge. We tried to get them to use our technology; to write everything down; to digitize their heritage.

Over the years, I would hear people talk about the vast amounts of money the Federal Government poured into First Nation's Communities and how they couldn't understand why the lot of the Peoples of these communities didn't improve...how alcoholism, drug abuse and unemployment was rampant.

The discovery of remains of 215 children in a mass grave at the Kamloops Residential School changed many of these misconceptions, or they certainly did for me...the blinders came off.

The idea that the Canadian Government was trying to help peoples of First Nations Communities. That we were interested in celebrating their culture; their traditions as part of the cultural mosaic of Canada, proved to be a false assumption.

The discovery brought with it the realization that we were all complicit in what happened in residential schools, however I was still left with uneasy questions..."so what now?", "who is accountable for righting the wrongs that occurred?, and where do we begin?. I understand the importance of Truth and Reconciliation, but what concrete steps can I, and others take in helping shape a better future?

Meeting Lee Jay, seeing what he's doing with the YOUTHeatre Movement represented somewhat of an epiphany ...change has to begin within and amongst the first nations communities as a first step. By sharing and celebrating their rich history; by building up their communities; by sharing knowledge and know how between these communities. This creates a shared sense of pride, purpose and collective responsibility for ensuring their future is rich in tradition and knowledge... knowledge that we all need to address the monumental global challenges that lie ahead ...For What it's Worth

For 25+ years Lee Jay Bamberry has worked in the Film/TV/Theatre Industry, as Writer, Director, Producer, and as an Actor for four seasons, on the Award-winning CBC National Television Show, "Da Vinci's Inquest".

Lee Jay has extensive experience as a stunt and film actor as well. He has worked alongside many legendary personalities, including: Jackie Chan, John Woo, Lou Diamond Phillips, John Frankenheimer, among many others.

Despite a successful career on and behind the camera, Lee Jay has found his lifelong passion: working alongside his lovely wife and his six children and connecting with senior youth and young adults.

His professional and artistic career is now in the training and building up of the next generation who want to pursue a career in performance and multi-media art forms or working with those who simply want to investigate how to express what our minds are thinking and what our hearts are feeling.

Lee Jay has taught at several schools in BC and has developed a unique teaching curriculum that focuses on The Art of Story, using Voice, Body, Mind and Emotion. He also provides special Art & Performance Intensive Workshops designed for Touring Projects.

For the last decade, Lee Jay has had the pleasure and privilege to write, direct, and tour his community driven Plays to help raise awareness about topical issues such as, addiction, abuse, abduction, mental illness, and now he and his troupe are in the throes of a play called COM·PLIC·IT, an intense story surrounding the Residential schools, circa 1960.

“Let us ignite the imagination, inspire hope, and compel listeners to be the change a hurting world needs. YOUTHEATRE is a community for those who wish to share life whole heartedly, transparently, encouraging those who would listen to uncover the truth about who they are, and to live out their true story.

YOUTHEATRE MOVEMENT (YTM) provides senior youth and young adults with Theatre Arts training and will work closely with its participants to develop collective creative productions where Story is intrinsic with their overall human expression.

Through our PRAXIS Workshops, ongoing mentorship, and community engagement, YTM aims to walk with people who may be suffering from addiction, mild mental illnesses, social anxiety, trauma, and other societal issues. 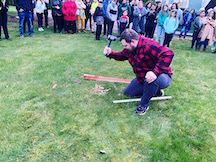 YTM will be a safe place for all peoples to express their story through art forms.

To describe the potential of YTM Events it is necessary to point out the significance of what is meant behind the word Praxis and Praxis Workshops.

PRAX·IS (from Ancient Greek: πρᾶξις) is the process by which a theory, lesson, or skill is enacted, embodied, or realized.

It is not merely practice. It is the practical application of any branch of learning while practice is repetition of an activity to improve skill.

A play, a song, a book, are all written to be published, recorded, staged, and seen.A dance, a painting, a film, are created to impact people.

A Collective Creation comes together by the artistic efforts of many people, to tell story, to process what they are going through, to bring catharsis.YTM Praxis culminates into Live Events to celebrate the expression of our community.

YTM will cooperate and work in conjunction with a wide array of partnerships, including:• Indigenous Communities• After-School Programs• Public and Private High Schools• Post-Secondary Schools and Groups• Charitable organizations

Our ongoing involvement with communities will allow for direct YTM scholarships and bursaries for those who want to get involved in an administrative or artistic capacity.YTM is committed to building relationships with people who are willing to learn through the Art of Storytelling and choose Healthy Lifestyle Changes.

For more information of how to get involved call us directly, or drop us a line.